The crisis in care, who pays? 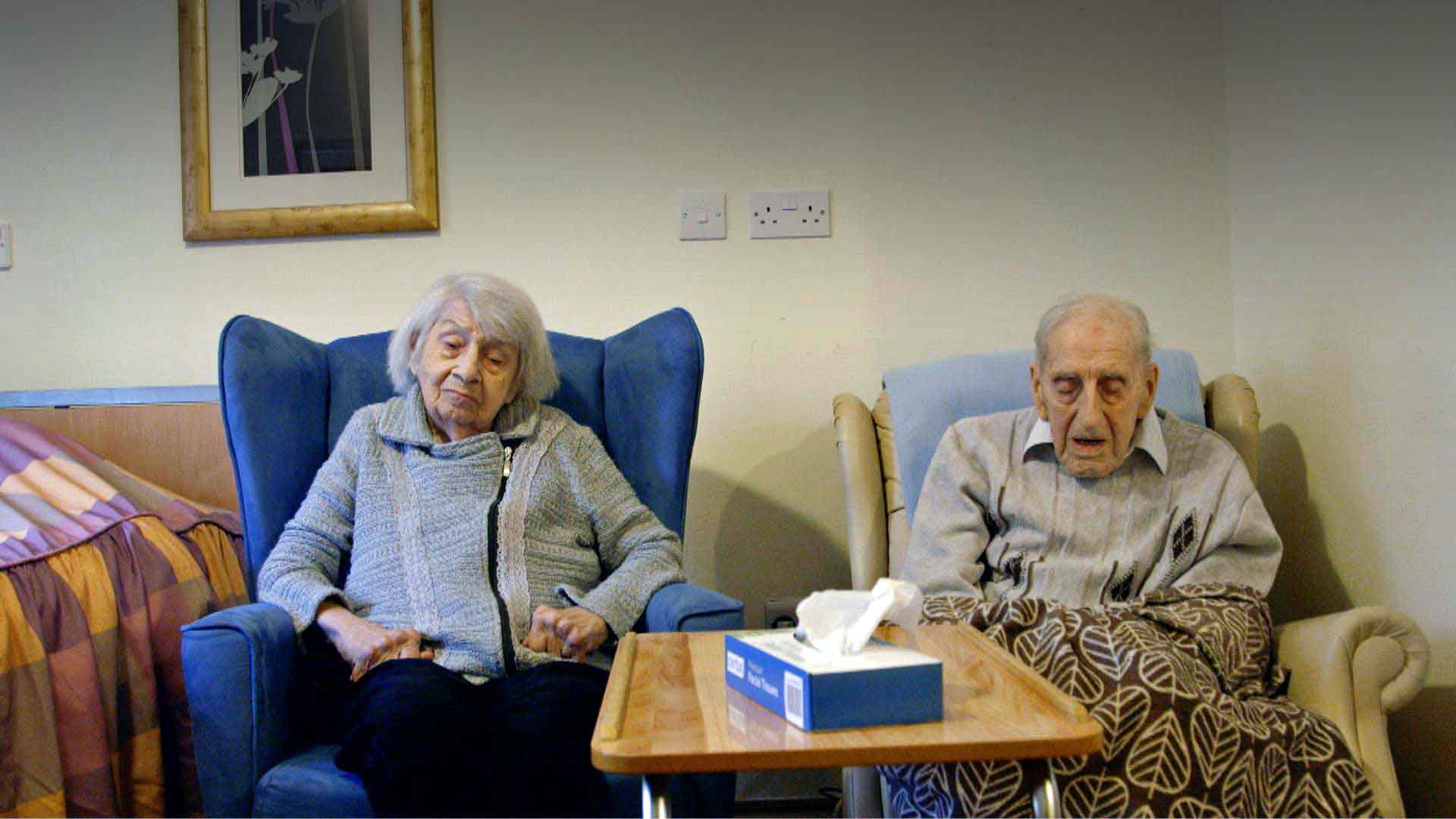 Over 10 months, a small team from the BBC’s Panorama programme documented the realities of how the care system is working in England. Based in Somerset, they followed the stories of people needing care and of the people trying to provide it. The pressures faced here are being felt across the country as the demand for help from an aging population increases and local authorities struggle with tight finances.

won’t forget you,” whispers 87-year-old Jean Chapman to the care worker, who has leaned forward to hear her words more clearly. “I’ll miss you too,” the woman replies, reaching forward to hold Jean’s hand. Other staff kiss Jean goodbye as she is pushed in her wheelchair towards a waiting ambulance.

Jean and her 96-year-old husband Owen are moving because their care home, where they have lived for a year, is closing.

“It’s incredibly sad,” says their son-in-law, Nigel. “We thought we’d found the care home from heaven really with the support here, the carers here. We just hope and pray that this is going to be the last change for them.”

Popham Court, an elegant cream-fronted building in Wellington, Somerset, is closing because it’s in need of modernisation but there isn’t the money to do it. According to the then chief executive of the not-for-profit company that ran it, council fees don’t cover the costs.

“I’ve been on the board of Somerset Care for seven years,” says Jane Townson. “And at no point has the home not made a loss. We’ve been losing money for years and we’re talking hundreds of thousands of pounds.”

Jean and Owen, who both have dementia, are heading to another home run by the company seven miles away. Over six months last year, at least 2,500 frail, elderly people in England had to move because their care home closed – a 39% rise on the same period in the previous year. It is one sign of the increasing pressures on a care system which is meant to look after some of the most vulnerable people in our society.

Local authorities provide adult social care – support with day-to-day tasks like washing, dressing and medication either in a care home or in someone’s own home. To be eligible you have to show you have a significant need for help and in England you have to have savings and assets of less than £23,250. The care systems in Scotland, Wales and Northern Ireland operate in slightly different ways, but many of the pressures they face are the same.

The ageing population means more people need help as they live longer with more complex conditions. In England, councils spend about £15bn a year from their own budgets on adult social care. In addition, they get some money from the NHS and many of those who qualify for council care have to make contributions to the cost. This brings the total amount local authorities spend on care services to around £21bn.

But since 2010, councils in England have had the money they receive from central government cut by nearly half, as part of the government’s austerity measures. Some of that loss has been offset by increasing local taxes, but the amount they can spend on all the services they provide from fixing potholes to libraries to social care has been cut by almost 30% during that time.

A Department of Health and Social Care spokesperson says it is “committed to ensuring everyone has access to the care and support they need, and have provided local authorities with access to up to £3.6bn more dedicated funding for adult social care this year and up to £3.9bn for next year”.

The government says councils’ access to additional dedicated funding for adult social care is worth up to £3.6bn this year and will increase to £3.9bn in 2019/20.

Even so, many councils say they remain under intense financial pressure. Last year, Jean and Owen’s local authority, Somerset County Council, came close to going bust. It had to make £13m worth of cuts to balance its books. Part of the problem has been overspending in areas such as children’s services, but the cuts are being made across the authority.

Stephen Chandler, who runs adult social care in the county, has had to find £9m worth of savings from his budget of nearly £140m. In the year ahead, he must find another £4m of cuts.

Stephen is in charge of providing care for about 6,500 people in Somerset and spending on adult social care takes nearly half of the council’s budget.

In the months that we follow him and his team, it’s clear how heavily this complicated balancing act weighs on him. “We’ve become good at ensuring that our money is only spent on those people with the most complex of needs. We can do that for a little bit longer but not much longer.”

Despite the growing demand for support, fewer people now qualify for council-funded care than did in 2010. This is partly because the financial threshold for receiving support hasn’t risen with inflation.

Many, like Jean and Owen Chapman, spend years bouncing round what has become a very confusing system.

Seven years ago, the Chapmans were struggling to cope and asked for council help. As they were living in the family home, its value was not included in the financial assessment and their savings were below the £23,250 threshold. It meant they got local authority help.

When living in the house became unmanageable for them, they downsized to a flat. The extra money from the sale of the house meant their savings were taken above £23,250 and they had to fund their care privately, according to their daughter Helen.

“That ticked along for quite a while until the amount of savings they had dropped to the minimum whereby they went back on to state care,” she says.

Now they are both in residential care, the pattern is being repeated. The value of their home is now included in the council’s calculations, so it is being sold to pay for their care.

“That money will then go into their bank account for use paying for the care home for as long as it lasts. When that is gone I assume they will go back to being state-funded again,” says Helen.

But while they are self-funders, they will also be helping prop up the care system.

A 2017 report by the Competitions and Markets Authority estimated that on average self-funders paid £44,000 a year for a care home place – £12,000 more than the average paid by councils for a place.

Jane Townson, who has now moved from Somerset Care to become chief executive of the United Kingdom Homecare Association, says that self-funders subsidising the lower fees paid by councils in care homes is endemic.

“We completely disagree with this, as a matter of principle…. It is a national problem and it is wrong, but what can you do if you want to keep the whole care sector afloat?”

Home care companies are more likely to focus either on state-funded clients or on self-funders.

At their new care home, Lavender Court, Jean and Owen have rooms next to each other.

Jean is wheeled into Owen’s room to sit with him. “I want to go home,” she says as she is hoisted into an armchair next to her husband. “You are in your new home and we are going to look after you,” the care worker reassures her.

When we visit four months later they seem to have settled. Their daughter Helen and son-in-law, Nigel are pleased with the care they are getting. The couple’s flat has been sold and that will pay for their bills for about 10 months before it runs out. Then the council will take over the cost of their care again. Some care homes won’t accept the lower rate paid by councils – at the back of Nigel and Helen’s minds is the worry that the elderly couple could be asked to move again.

Like many families they have found navigating the care system takes its toll.

“It’s exhausting, are you exhausted?” says Nigel, turning to Helen. “It’s been a long haul,” she replies. “Not physical weariness, it’s the mental fatigue of trying to hold it all together. Making sure you are doing the right things for them at the right time.”

Nigel says the current system is a mess. “Families need to know what to expect when they care for their relatives in the future,” he says. “How to access the care, how to access the funds and everything like that, and it is a worry and it won’t go away.”

Geocare Services was established in 2020 as part of GeoTraining (2017), following the growing need for reliable, highly skilled and competent staff that offer value for money in the healthcare industry. We source, supply qualified nurses and highly trained support staff and care staff for a wide range of industries.